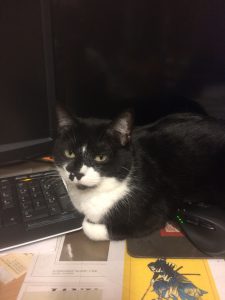 November 30, 2017 is Roxanne’s anniversary. It was one year ago today that I picked her up from down the road where she was going to tossed back into the snow. We think that she was about two years old at the time and that she probably had a litter. She was and is a very friendly cat that adapted to a new home and six other cats with very little difficulty. She definitely was not feral  so I think she was dumped.  After a three day isolation period she went to the vet for vaccinations and examination. She was then introduced to the clowder and life carries on. There were some fights and howling, but we got over that  quickly. Roxy bonded well with the kittens. A couple of weeks after moving in she went into heat. Tenzin was attracted to her and she made herself available. She was spayed soon after.

One year later she now likes to go outside on the leash. When she wants out she goes to her leash and tries to put her head in the loop. Now after going out she wants to come to the office and has now become the second office cat.

I can not imagine this wonderful cat left in the snow for the winter. I am so glad I kept her and she is a fine addition to the family. She is my adventure cat and second office cat. Soxs has to share some office time now.

The world is full of animals left to fend for them selves. This is wrong. My hat goes off to the rescues and individuals that rescue these creatures. Animal abuse is as vile as child abuse. In closing rescue where you can, support or volunteer at a shelter. Donate if possible.

That’s my story for today. Thanks for reading. Hug a kitty and do something green for the environment and please leave a comment.