Todays Guest Cat is from the south of Spain. This is a wonderful and must read story. The narrative here is as Michael wrote it.

Hello,
Please let me introduce you to Shugar. 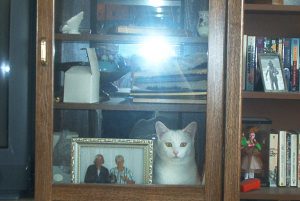 She was born in the spring of 2004, most likely in March.  I say most likely because she was born feral and her mother gave birth to the littler under an empty mobile home.  My mother lived next door and always watched out for the cats in the neighborhood.  They had a tendency to keep down the mice and other rodents so it was a benefit.  When this one was born, it was a bit of a surprise because as you can see, she was almost pure white.  When she was just a kitten, she had a yellow patch on her head.  All the rest was pure white.  Mother did not adopt her but only watched them from a distance making sure they were ok and occasionally throwing some dry cat food on the lawn (weeds) next door so the kittens could search for food.

When she was about 4 months old, Mother heard this little white kitten scream for dear life.  Mother raced out and found a large male had this little one by the head and was attempting to kill her.  Mother screamed at the large male and he released his hold.  In the split second he released his bite, the little one raced for the wire fence between him and my mother and jumped to the top of the fence and into my mothers arms.  So, the little one had adopted my mother.  For her safety and for my mothers comfort.

On a visit later that year, we talked about what her name should be.  I opined that she should be named Princes Luneria, thinking she was pale and white as the moon and I liked the idea of having
a princess in the family.  After all, I already had Queen Sheba, and Prince Vlad, why not a Princess.  Well this did not go over very well and when asked, Mother said “you will shorten it to Lunatic”.  I said “but she is”!  So Mother named her Shuger, figuring to shorten it to Shug.  (Notice the spelling difference between how Mother named her and her name now.)

Well, life was good for this little one.  She was always given a bag or box to play in and lived inside safe from any nasty old Toms. 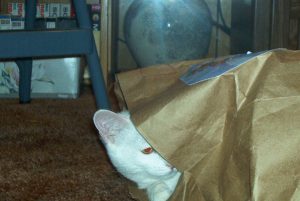 Mother had a heck of a time getting her to eat right and to answer any kind of call.  She seemed to be completely independent and would not obey any commands.  She would always climb on the desk when Mother wanted to write a note and push anything in her way off the desk so she could lay down undisturbed.  She was always a source of amusement to my mother even when my mother was suffering with Cancer.

In 2010, my mother was diagnosed with Brain Cancer and had surgery.  I came, for obvious reasons, and while Mother was convalescing after the surgery, I took Shuge(a)r home with me.  I told the doctor that my mother needs to have someone tell her that she cannot drive anymore.  Surprising to me, Mother said it as well.  So after her recovery, I moved my mother in with me, a trip of about 700 miles, from her beloved Colorado, to the western side of Idaho.  While in my care, I found out that Shugar was profoundly deaf.  This is a trait common among albinos so I summarized that Shugar was albino since she had the tell tale signs of pink skin, pink eyelids and nose and pure white fur.  It is when I was visiting a vet in Idaho that I accidently misspelled her name on an official document and her name was changed to Shugar.  Sorry mother.

Before long, my mother passed, but Shugar stayed on.  She did have a friend in another cat of mine, Prince Vlad, who was almost pure Black.  This is the famous photo that my dear Taetske found and absolutely loved.

Now, Shugar is a world traveler, having managed to accompany me to the South of Spain.  She still has not quite taken to the country side because it is all a bit wild to her.  Back in Idaho, she had a secure back yard with very few intruders.  Here, she does not know what is around the bend.

She is going to celebrate her second Christmas this year and in March she will be 14 years old.  She has been diagnosed with diabetes so I give her insulin every meal but she is still a beautiful and loving friend

That’s our story for today. Hug a kitty and do something green for the environment. I would like to thank everyone for reading Cat Care. If you have any questions please leave a comment at the bottom