I have had three of my cats sterilized. Soxs was neutered at six months. It was a typical surgery with no complications. There was some swelling which is natural. Soxs did not lick his surgery so he did not have to wear a cone around his neck. After a week or so everything was healed and we carried on. Ariel was the same story. He never licked and it did not slow him down a bit. On the way home from the vet he talked to me like he never talked before. He was probably giving me heck for leaving him somewhere for the day. When he came home he went to the cat tree and just relaxed.

When Roxanne came to live with us she was intact and soon after she went into heat. There was some night time howling and Tenzin developed feelings for her. She went to the vet and got spayed. This procedure is invasive and in effect is a hysterectomy. If you go to Wikipedia the are good explanations and pictures. Everything was generally going well. She ate well and good energy, however after a week the surgery was still weeping and there was swelling. I went back to the vet for an examination where she was given an  antibiotic and a cleaning of the surgery by squeezing some fluid out of the stitched area. 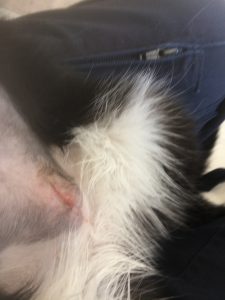 This picture shows her shaved belly and the swelling. After the antibiotic she healed quickly with no further problems. Why she got infected is difficult to explain for a layman. For me it means a person has to monitor all surgeries and go back to the vet if necessary. Roxanne is an active cat and was  hard to keep quiet and relaxed after the surgery. A spaying procedure should be healed up in about a week. My vet keeps a cat in the office for the day to monitor for complications both male and females.

That’s my story for today. Hug a kitty and leave a comment for me.