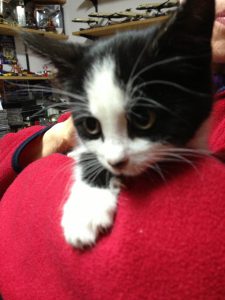 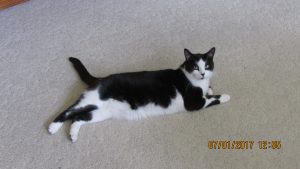 Soxs was found in a wood pile at about four months old. He was a scared and hungry kitten. When approached he would hide.This made capturing him difficult. He was eventually captured in a live trap. We worked for about a week to capture him. This trap came in handy later. After we caught him my wife let him out in the garage. I came home from work and got him in my hands. It was amazing. He became domesticated instantly and by day two he used the sand box. I took him in my hands and introduced him to the dogs. I let them smell him and then monitored closely until I was confident Soxs would be safe. When Soxs was with us for a few weeks I was walking down the hallway and stepped into a pile of clear noodles. What! It was worms and the beginning of my cat care questions and a journey into maintaining cats. We had him neutered at about six months. He is four years old now. Soxs likes to go outside on the leash under supervision. When he gets scared he bolts to the house and wants in, NOW. I use a 25 foot lead on the leash and if I let him roam a bit I can always see where he is. Soxs is a domestic short hair tuxedo cat. 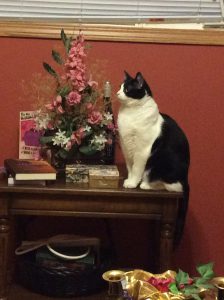 Lacy was adopted at three years old from a family that could no longer keep her. She did not like the move and cried all night. She hid in the closet for months and only came out when she was ready. When she finally was comfortable with being out and around she would monitor the front door . One day when I was fixing the door knob she escaped. I thought I lost her. The fact we live on an acreage with lots of bush I thought I had lost her forever, but we started seeing her sneaking around  during dusk and into the night. I put out a wild life camera and then some food in a live trap that we used for Soxs. We caught her. During her two week vacation she lost weight and bruised her paws. Lacy also had a tremendous personality change from this event and becoming more friendly and cuddly. She does not go outside now. Lacy has had no medical issues except for a period when she went off her food and became quite lethargic. A vet visit with blood work found nothing except dehydration. I believe she was stressed from the new kittens coming into the house. Lacy is five years old now and is a female domestic short hair tuxedo cat. 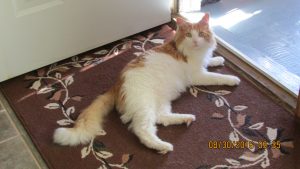 Tenzin was adopted from the Winnipeg Pet Rescue Shelter. He was a stray cat from the streets and was picked up by the Pet Rescue centre at about nine months old. He had to be shaved as he was very matted. Now at two years old he is a handsome domestic long haired orange and white boy. He was quite timid when he moved in. It took him an hour to finally come out of the cat carrier. Then he hid in the closet and came out to eat and use the litter box. Tenzin spent about three months in the shelter and I think this caused some emotional stress. He would suck his toes when he got scared of something. This behaviour comes out some times, but I believe now that since he lives in a free living comfortable environment, he is happy. When he first moved in he did not like to be handled. Now he sits for brushings and some cuddles. He recently developed a hair ball issue. It is not pleasant watching a big cat wretch while throwing up a hair ball. He spent a day at the vet and now gets hair ball medicine and regular brushings. 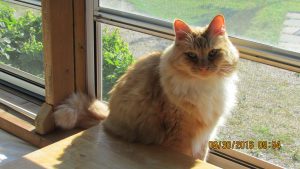 Alexis is a domestic long haired  Ginger girl. We adopted her from a private family. She was eight years old when we got her. At our first meeting she was all over me. That ended when we got home. Now she tells you when she has had enough from the other pets, brushings or cuddling. She adapted to her new home without much stress. We just let her out of the carrier and she found a spot to be on her own. She generally avoids the other cats  but at times will let others come close. She needs brushing and hair ball medicine to avoid hair ball issues. She adopted my son and goes to him regularly for companionship. She used to come to bed to wake up my wife regularly to sleep until the kittens came. 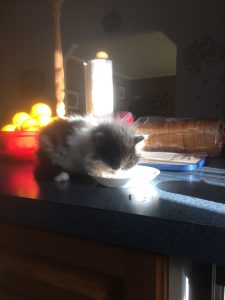 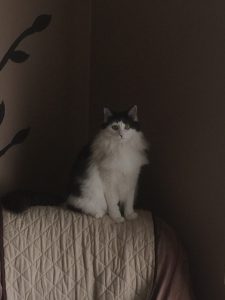 Ariel was found in the bush at about four weeks old. I was in the back yard with Soxs when I saw a little black and white kitten. I took Soxs back to the house and went back and found him sitting on a log. I had to chase him through the bush to catch him. Being small, hungry and weak I caught him and took him in the house and opened a can of wet food. He ate like crazy and then went to sleep. I had him neutered at six months old. He is now almost a year old, a happy domestic long haired boy. He spent several weeks locked in the bathroom when no one was home until he was big enough and strong enough to be loose in the house with the rest of the family. 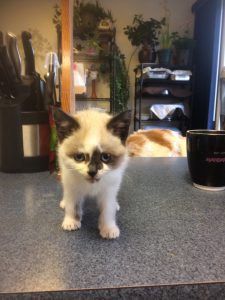 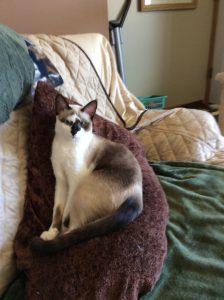 A week after I found Ariel I found Esther. I went to feed the horses in the pasture in late October. On the way back home I heard kitten cries. I stumbled through the bush and eventually found a three week old Siamese kitten. I walked home with this pretty little girl in my hands.  I put her on the cupboard and gave her a can of wet food. Like her recent sibling, she ate and slept . Both of these  kittens used the liter box without training. She was so small she had to be separated from Ariel because he would play so rough he would make her cry. Esther was also isolated from the family when there was no one home. Both of the kittens would have probably been still sucking. We found that Purina make a kitten milk formula. We fed them this until weaning time. They loved it. Esther is now almost a year old and full of energy. Raising the kittens from babies made them fearless. They are not scared of the dogs or the vacuum. 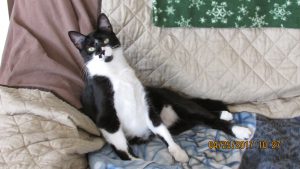 A month after finding the kittens the neighbours down the road phoned and asked if we lost a cat. We noted that all our cats were home. The neighbours said that this little cat came to the door asking to come in. They gave the cat regular milk which gave her diarrhea.  They could not keep the cat and was going to put her back outside. I went right over and as soon as I saw her I brought her home. I isolated her in my office for three days until I could get her to the vet. After a thorough check up we brought her into the house and introduced her to the clowder. There were some fights among the adult females with some break ups required. Almost a year later everybody gets along fairly well. We think that this little girl was dumped in the country. We also think that she had a litter at some point. I have never seen a cat adapt so quickly and so easily to a new family. She bonded well with the kittens and loves to go outside on the leash. The litter box use was immediate. Roxanne is my adventure cat. She is not scared of much and could be outside all day. 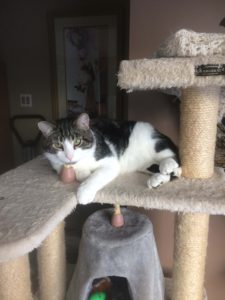 This is Norbu. He was seen through out the summer of 2018 wondering through our yard. We thought he was a kitten. It was decide to live trap him and give him a home. On July 09,2018 we succeeded in trapping him and to our surprise it was discovered that he was an adult tomcat and a wild feral cat he was. We went to the garage to inspect him and he got out and disappeared into the garage for a week. At this time our vet had a special on neutering so it was decide to get him done and vaccinated. He was so wild it was like putting a whirlwind in a jar. 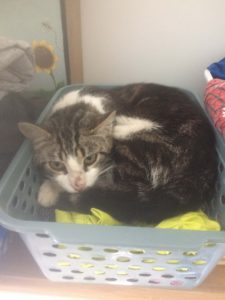 We  brought him  home and isolated him in the bathroom for a month. This picture is Norbu at about a week into his rescue. He was not happy. That bruise on his nose is when he tried to get out of the trap. It has since healed nicely.

After a month I decided that it was time for him to come out of isolation and meet the rest of the family. I just opened the door and waited to see what happened. It turned out to be a fairly easy transition and now with his seven month anniversary coming up on January 09,2019 Norbu has become a huggable house cat. He is still cautious, but I can hold him and he loves to play with Tenzin. Norbu is family! 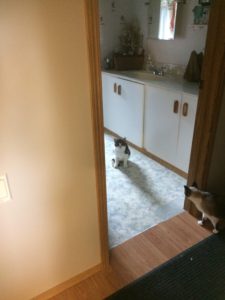 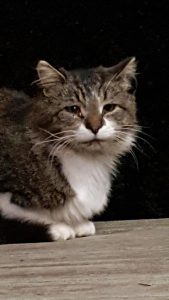 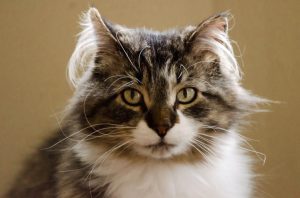 Raymond is not my cat but is a fabulous example of a feral cat that was rescued by my friend Janet. Raymond was fed outside as a feral for a year. After he came around not looking very healthy it was decided to live trap him and get him to the vet. He was transported to the vet the same day he was trapped. He was vaccinated, neutered and treated for an eye infection. He was brought home and hid in the basement for three months. One day he came out and responded to attention and is now a loving indoor happy cat. Raymond was diagnosed with feline FIV. This means he should be raised alone but he lives with Licky with no issues. Raymond is a handsome domestic medium haired cat. Raymond is approximately 3 1/2 years old and is an inside cat. 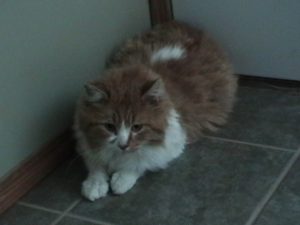 This website is dedicated to Rufus. Rufus was an older tomcat that was homeless with no tattoos or chips. He approached my wife Rachelle one night in town and cried for help. He was a beautiful orange and white long haired boy that was dirty and matted. When he came in the house, we fed him and then decided it was bath time. He took to the bath with no problems. I pulled large turds out from under his tail. This happened in the winter. Rufus had frost bitten ears. He was not skinny so he either scavenged for food or people were feeding him. After a short time he became very comfortable in the house. He would come when called and loved to be handled. The visit to the vet was typical with vaccinations, clipping and getting neutered. Three months after we had him he got very sick . He overnighted at the vet and then passed away.  Rufus was one of those one in a million cats that was so wonderful. We miss him to this day. No one knows why he got sick, but I am thinking that some underlying medical issue was accelerated by the surgery. In hind sight, being an older cat I would not have gotten him neutered. He didn’t spray, he always used the litter box and there was no one to get pregnant. A mystery that will never be answered.

The purpose of these bio’s is to illustrate where my cats came from and a little bit about their needs and what responsibilities are required to keep a cat. I will expand on many issues on the Maintaining Your Cat page.

21 thoughts on “Meet The Kittys”