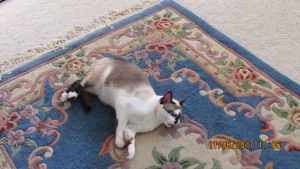 The time has come to take Esther to the vet for the spaying surgery. I trust our vet but I am still nervous and I can’t wait for it to be over and she is healed up. The healing should take about a week. Roxanne didn’t slow down one bit from the operation and these young cats bounce back well. I recently wrote a post describing that Esther was in heat and this procedure will remove the natural events of an intact cat. Esther howled, marked her spot and made herself available to Tenzin. It can only be better for her not to endure the regular cycles of an intact cat plus it’s easier on everybody else in the house.

Today Esther is having a regular day with supper coming at her normal time. Just before the vet closes I will deliver her to the vet office where she will fast for the preparation of the surgery. Tomorrow she be given an anesthetic and the surgery will begin. I was told it goes quick. Along with the surgery Esther will be getting a tattoo and her nails trimmed.  Then she will be put under observation for the rest of the day and I will bring her home on Thursday. She will miss coming to bed and snuggling at night.

The tattoo is a good thing. When someone finds a stray cat with a tattoo it’s obvious she belongs to someone. A micro chip needs someone to take the time to read it. I am not saying that microchips are wrong, in fact microchips have led to many recoveries of lost pets. Both methods are good. My Percheron Rose has a chip. It cost $25.00 and is well worth it. Only two of my seven cats go outside. The two that get out are on leashes and are monitored constantly. That’s why I have not chipped the cats.

The spaying procedure removes the uterus and ovaries. Esther will never have babies now. The cost of the operation is about $200.00 in Canadian dollars. This is cheap compared  to other parts of the country. The spaying procedure will also reduce the possibilities of the kitty getting other health issues that come with old age and in fact a spayed cat will live  longer than her intact counterpart. I think that if a person was going to conduct a Trap Neuter Release program this would certainly reduce the number of unwanted kittens in the world. The question I have is how would a person monitor some of these  feral cats until the surgery healed? There would have to be a responsible plan in place so that there is not a cat suffering from some surgery related complication.  If you would like a more detailed explanation of this surgery I am including a link to a Wikipedia article.

That’s my story for today. Hug a kitty and do something green for the environment. Please leave a comment or question below.