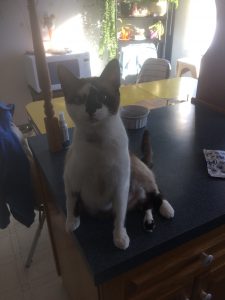 Esther is doing well after her surgery. Her spaying incision is now four days old and to me it looks like it is healing well. She had a day or so grogginess from the anesthetic. During the first couple of days she was clingy and wanted to cuddle. She had two mornings of pain killer.  She slept in bed as she always had done, but she had to touch someone  until she fell asleep. Her appetite is normal. Her energy is on the rebound.

While Esther was away for a day and a half Tenzin was obviously upset. He hid and did not interact as much. During the night Ariel came to the bedroom to look for Esther. Now that Esther is back these two are back to normal.  The more time I spend around all my family members the more I realise how much they understand and feel. Anyone who says cats don’t care obviously isn’t in the moment.

With seven cats and two dogs in the house the house work is an ongoing project. This morning as I was about to have breakfast China, my Husky threw up on the floor. Lucky for me it was on a hard surface with just a wipe up required. A wipe, a wash and a squirt of spray nine and I was done. Then I noticed that one of the litter boxes was loaded from overnight activity. Now I had to clean all the litter boxes. We now have five litter boxes. We put out one more after Alexis had her UTI. The rule is to have a litter box for each cat plus and one extra. We are making it work with five until we are forced to change. The litter box illustrated in my Products page works really well for reducing the amount of litter outside the box. We have two in use.  The toilet should be cleaned after every use if your cats look in the bowl and the lid is never closed. Never use chemical toilet bowl cleaners. It will poison your cat or dog. Vacuuming and laundry is a daily chore. Sometimes a quick booming works but after a day or two the vacuum has to come out. We really like the Bissell units as illustrated on the Products page even though we have central vac. I think if you can’t keep up with the housework maybe there are too many animals in the house. Get help in some way before somebody steps in and forces the issue.  I have read many news stories of animal hording and to let thing get that far is totally unnecessary.

I recently read an article on declawing. The article went on to emphasise that the procedure is NOT good for your cat. I am shocked that it is a procedure that is even considered these days. It is a form of cat torture that is only to the benefit of the owner. It is like removing the first knuckle off each of your fingers and toes. We have seven cats and I see no need to do this to anybody!  The solutions to scratching are learning how to trim the cat’s nails, cat trees and scratching posts. I think furniture covers are a necessity for many reasons. It’s nice because they are machine washable. Its easier than shampooing a chesterfield.

That’s my story for today. Please leave a comment or question at the bottom of the page. We are now on Twitter @CatInTheCradles. Hug a kitty and do something green for the environment.